During our short Rizal visit, we had a chance to visit Calinawan Cave quickly. Calinawan Cave was named after the word “linaw” which means clarification. The cave is dark but named Calinawan because during the world war, Filipinos and the Americans meet here and had clarifications or agreements. 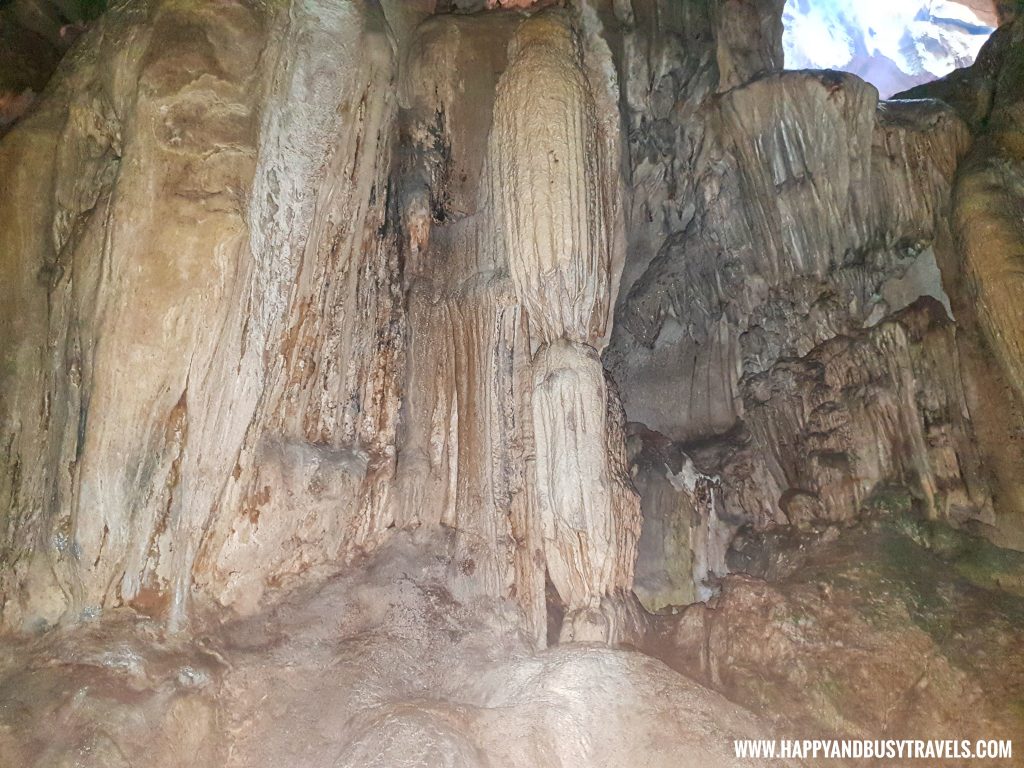 The cave is located in Tanay, Rizal, near Daranak falls and is just near our hotel, so we arrived 7:30AM. The entrance fee for the cave is Php 40 per person plus Php 200 (per group) for the tour fee. The entrance fee increased from 20 to 40 because recently, they already have helmets (according to our guide). The helmets available at that time are too big, no size for children. My helmet is even larger than my head haha. The tour guides will also provide mini flashlight to each tourist. 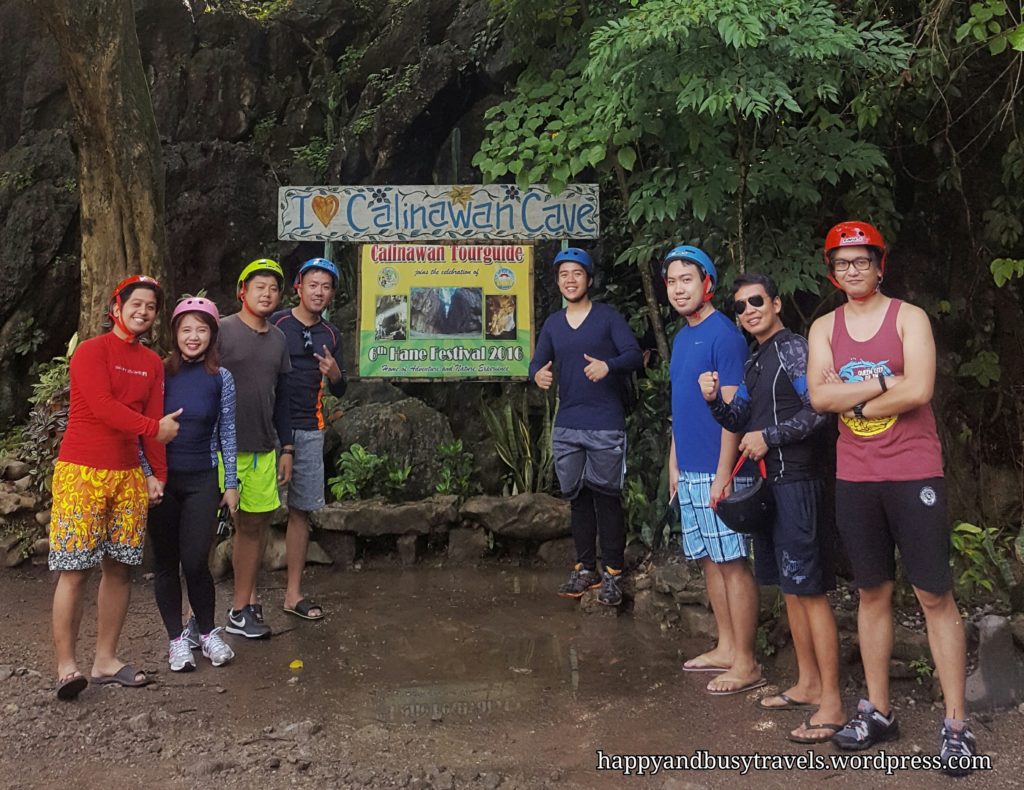 The entrance of the cave can be easily seen because of this “I love Calinawan” sign. The actual entrance is just beside the sign. 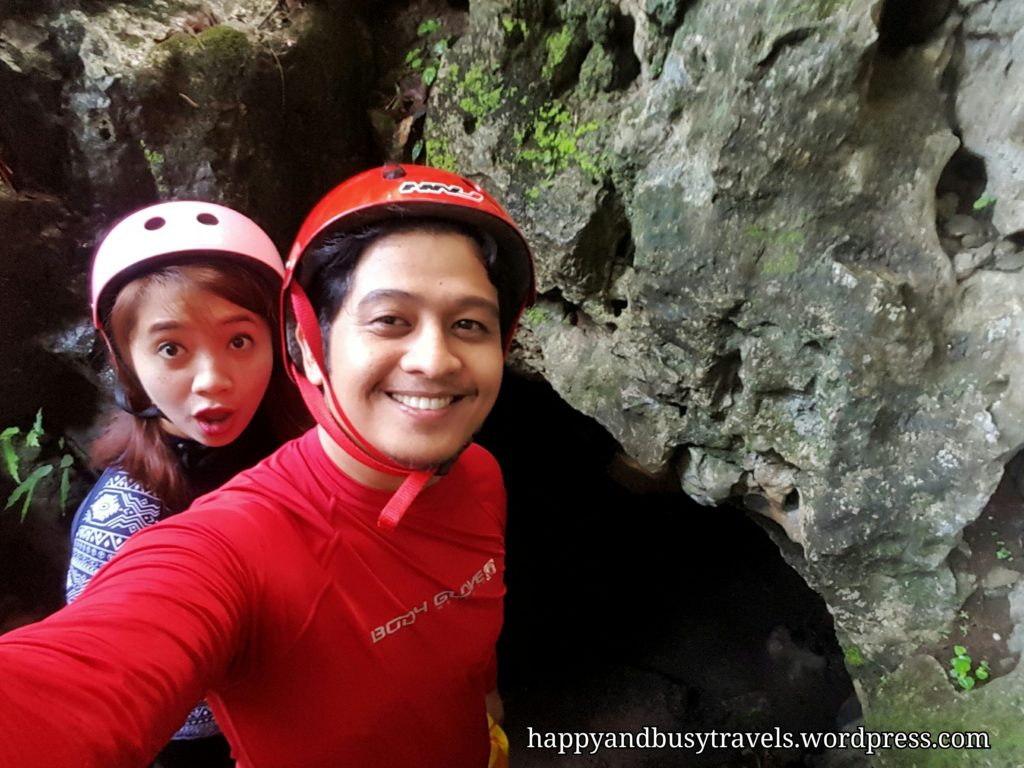 Let’s go inside!Here we are, ready to go inside! Come on!

The tour in the cave consists of 5 stages, stage 1 is the part of the cave which can be somehow penetrated by light. So, upon entering, you will of course immediately see rocks.

Here’s one famous rock formation inside the cave. As you can notice, the rock looks like the side view of the face. 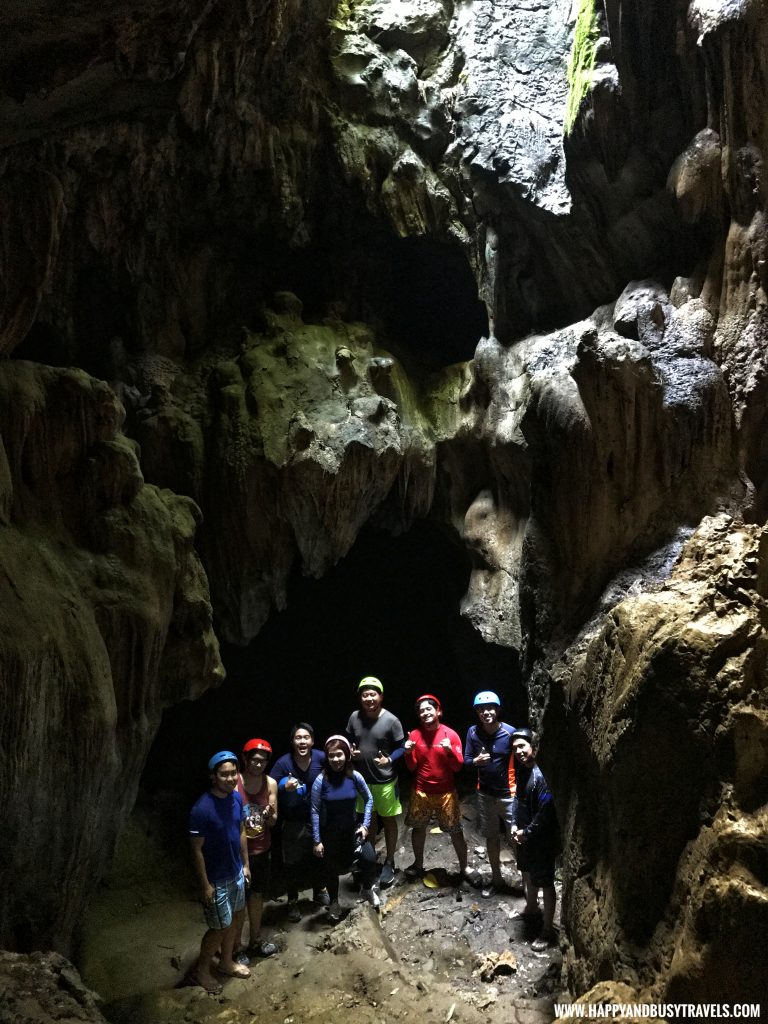 The cave used to be a set in a lot of movies and series. Think of any Filipino movie or series that has a cave like set, there is a big chance that it was shot inside this cave. It is amazing to think that there are a lot of movies which were made here, however it is part of the sad history of the cave.

Back in the 80s, the care takers were not strict, they allow the production staff to decorate the cave with more glitters, and add a lot of fake plants. This destroyed the natural glow of the cave, and it killed some parts of the cave. Luckily the destroyed part is just at the section near the entrance.

The cave, still has its natural glow in most of its parts. 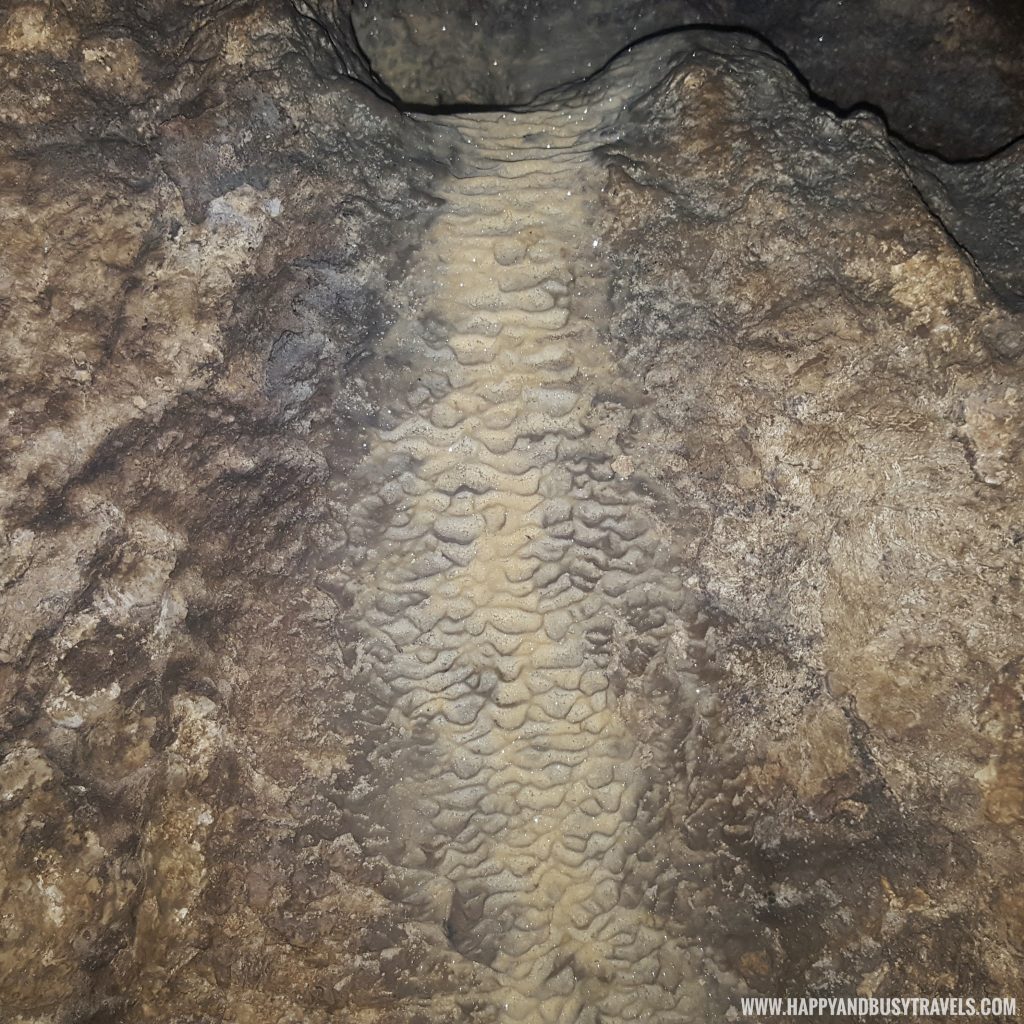 It looks like there is a lot of glitters, but these are all natural. Isn’t it wonderful? 🙂 We were informed that we should not touch it because it will disrupt the natural process of making these wonderful shine.

Another distinct rock formation are these two, the Mama Mary looking into the light (right), and the head of a T-Rex (left) looking down. 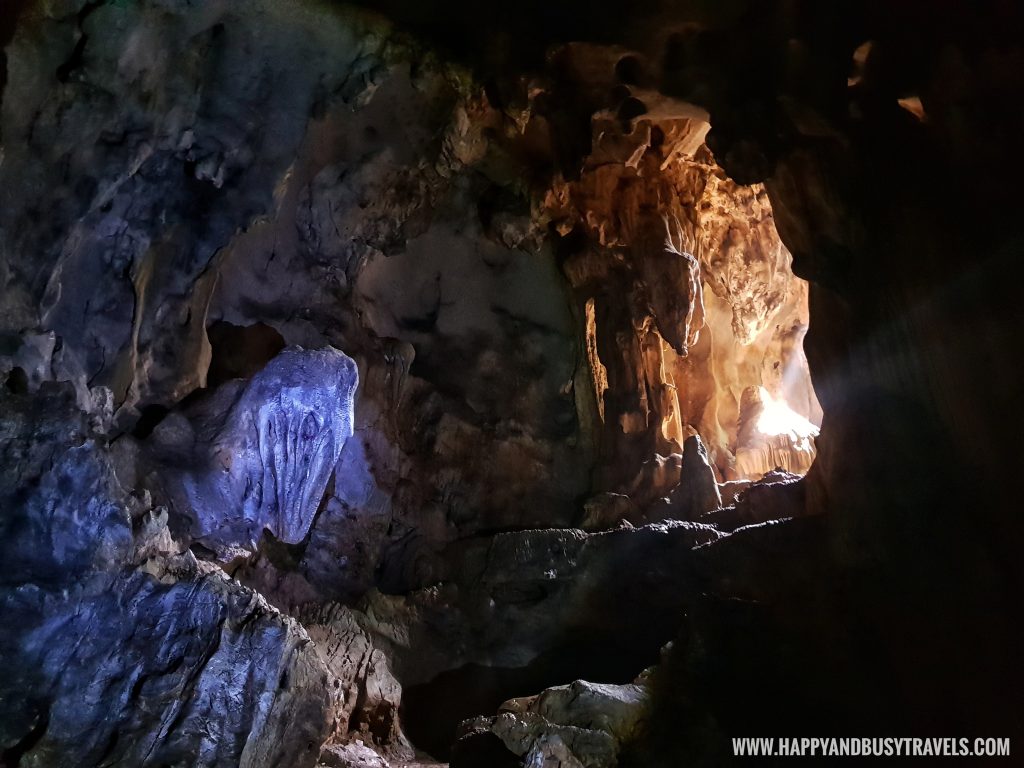 As we move towards inside the cave, there are other wonderful rock formations. This rock has a crystal formation at the tip. It is such a beauty. 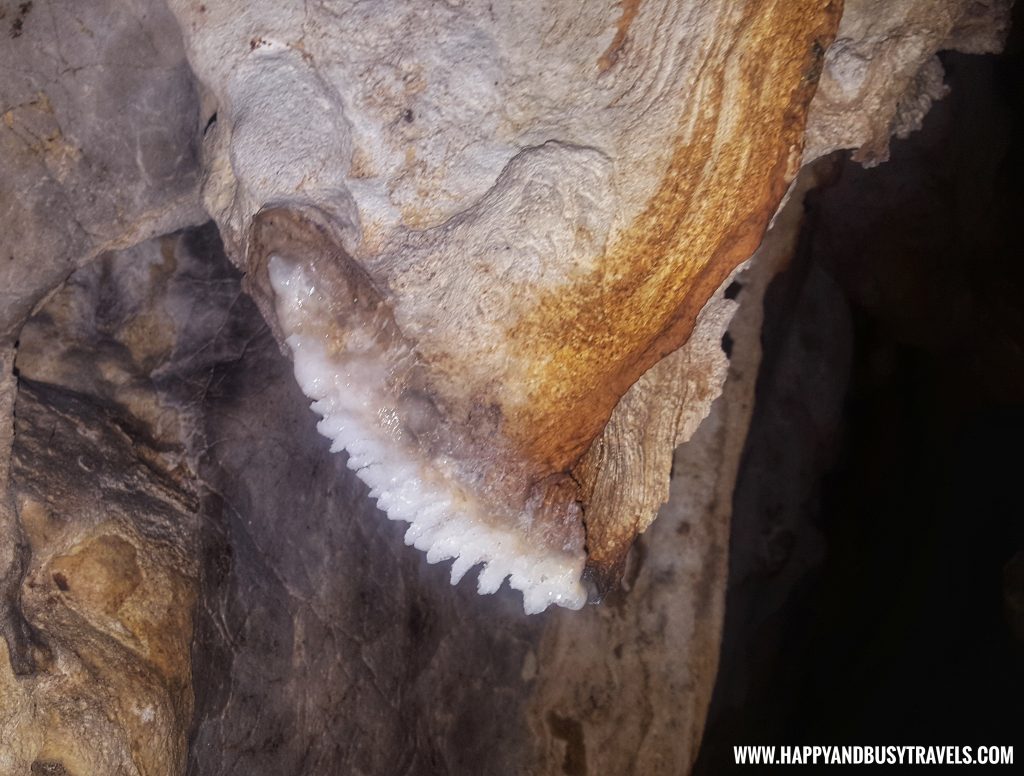 Here are more pictures of the rock and crystal formations in stage 1.

Before we went to the 2nd stage, we were asked to choose between 2 paths, the easy and the hard path. Well we wanted the challenge so we choose the hard path. In this path we need to crawl and be dirty hahaha. 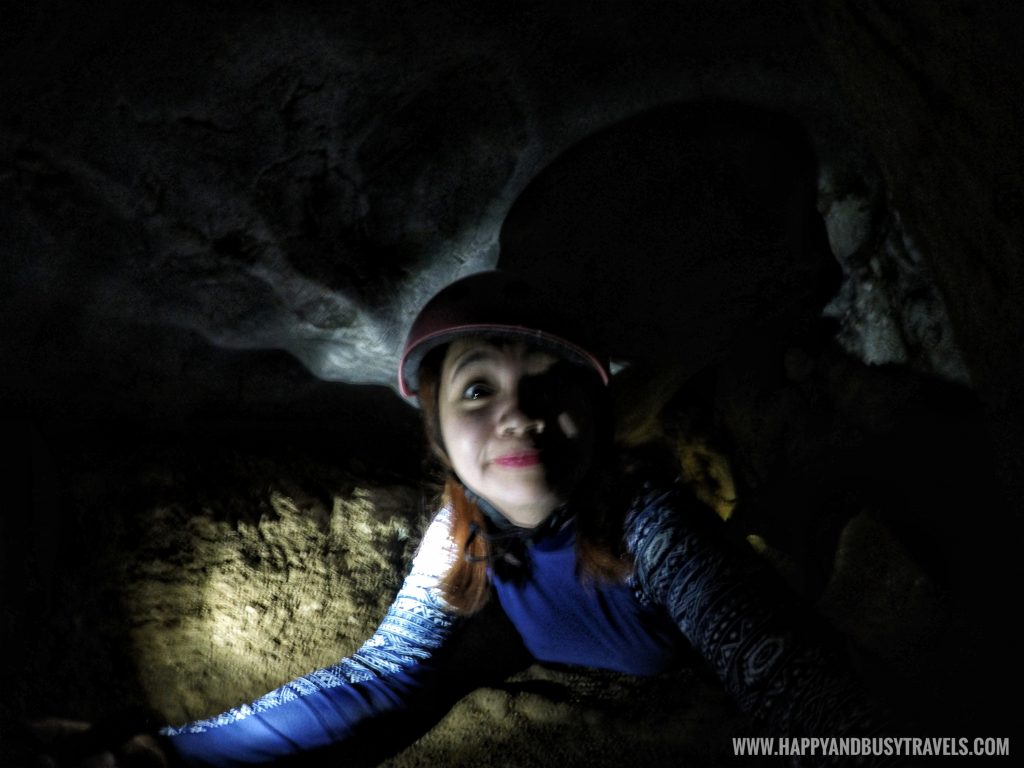 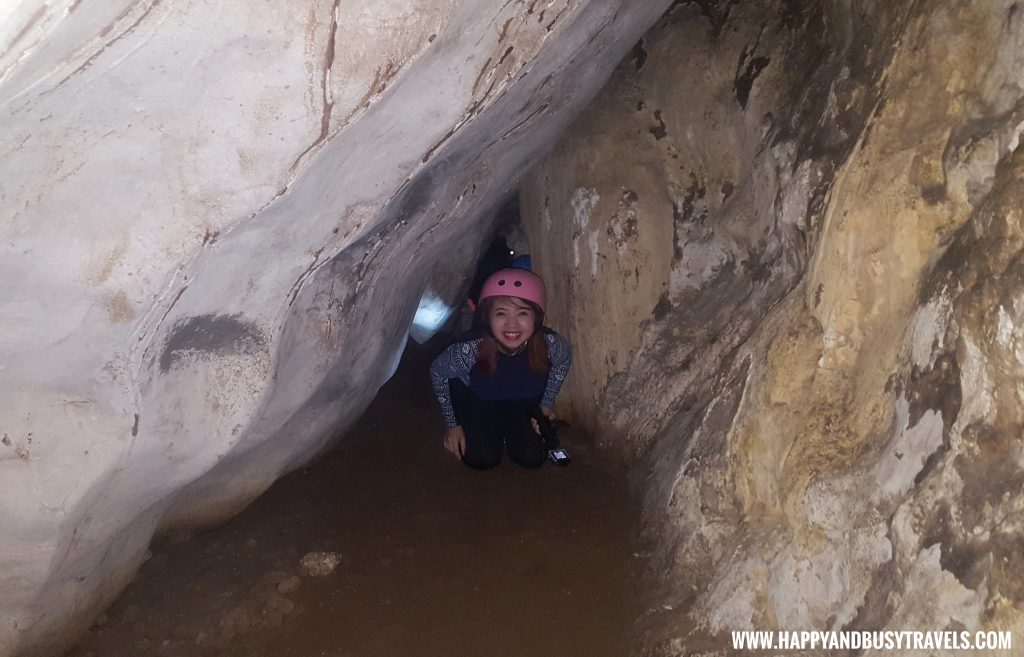 I’m small so it was easy for me hahahha, here’s another proof that being small is an advantage inside the cave. 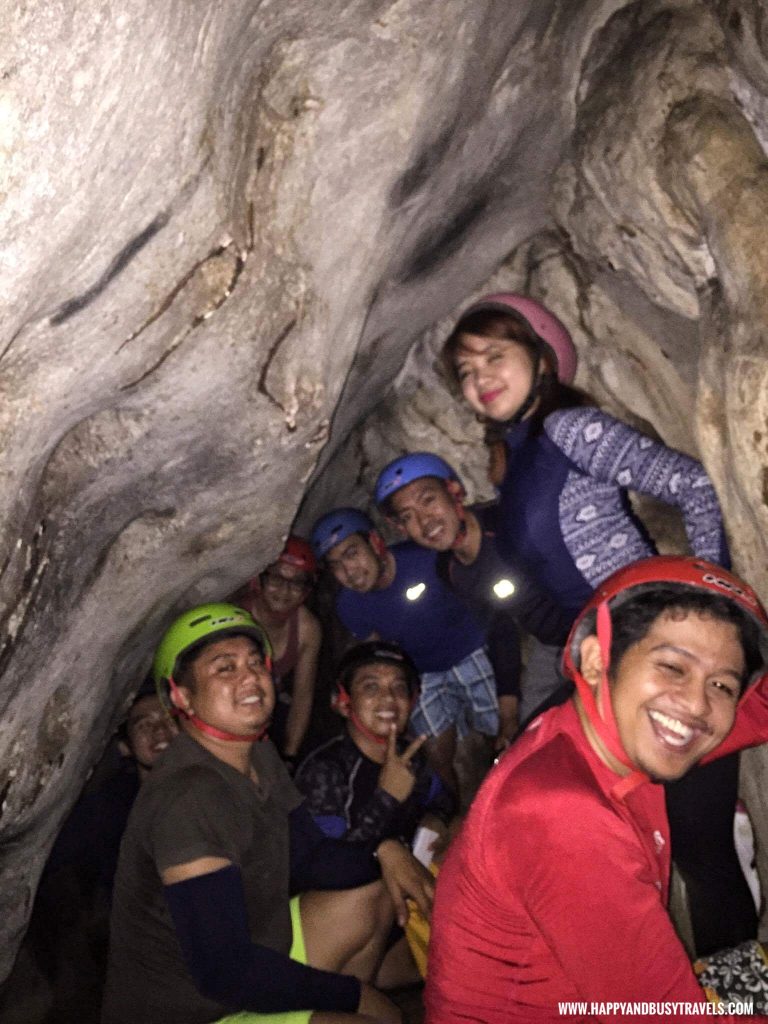 Oh yes! I can stand while they can’t! hahah they have to kneel, bend, or sit hahahha.

Then we arrive at the 2nd stage of the cave. In this stage, we experienced total darkness after we were requested by our guide to switch our gadgets and flashlights off and turn off any light source. So, we also experienced the “sound of silence”. After we were asked to close our flashlights and gadgets, we were asked to keep quiet for 10 seconds.

I would really like to show you how it looks like during those 10 seconds, but you won’t see anything 😆

Inside the cave, there are also animals…. mammals… oh yes you guessed it right! bats! There are bats inside the cave. These are small insect bats. 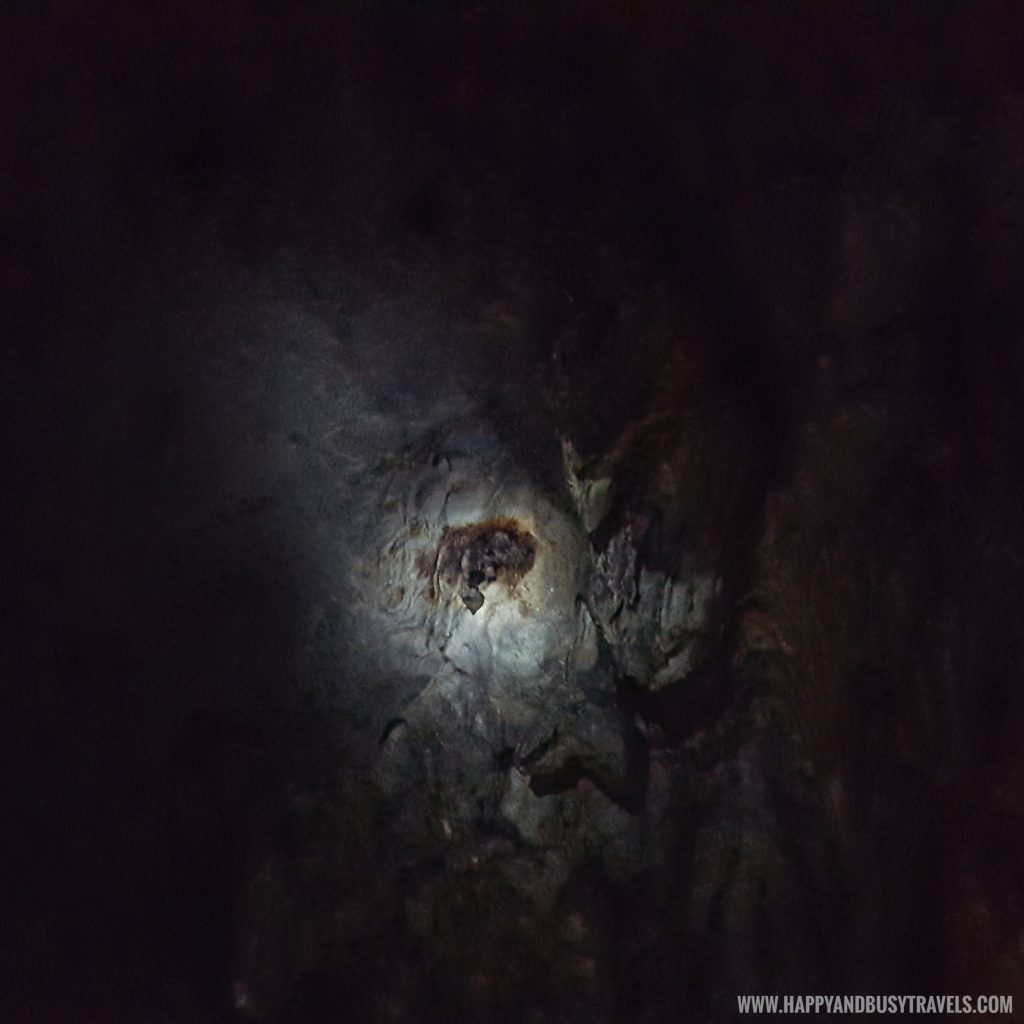 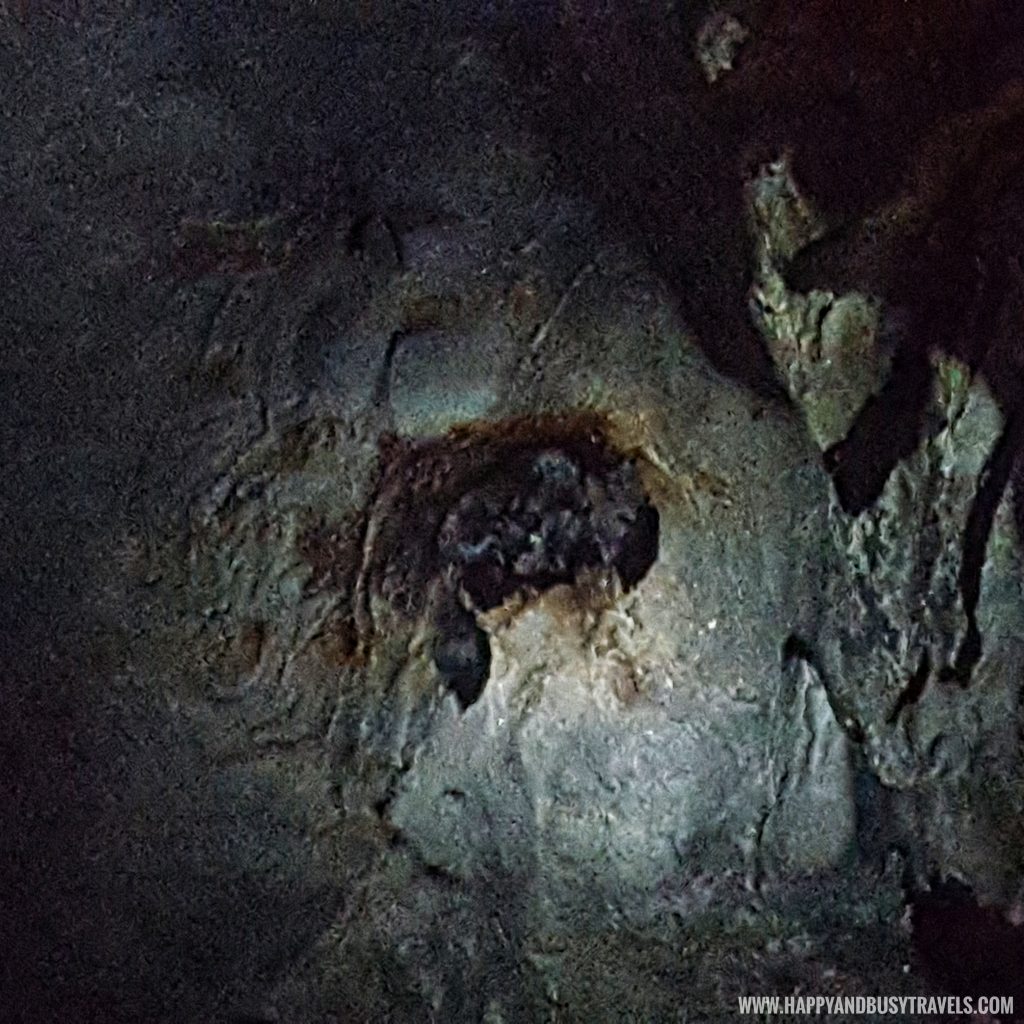 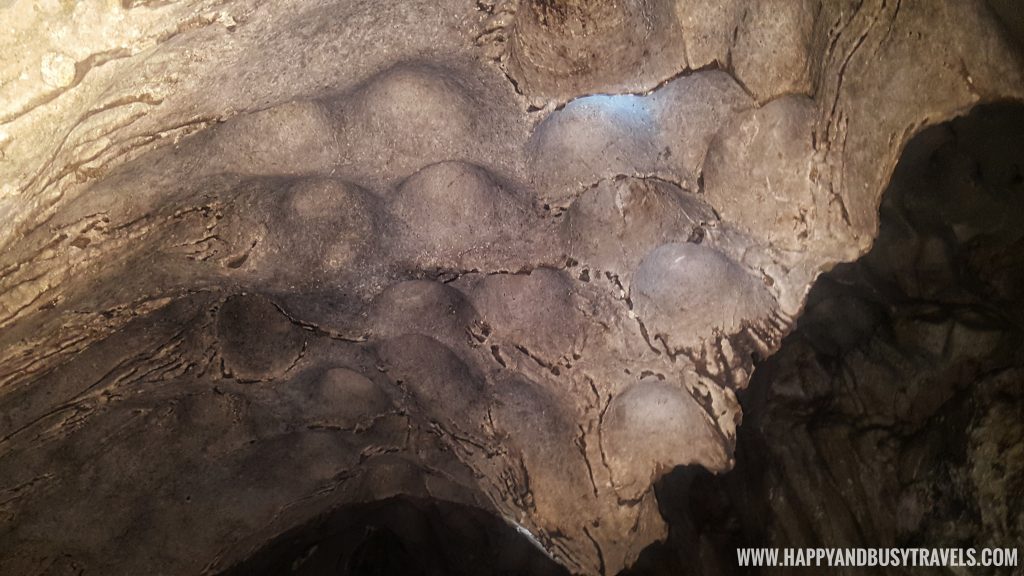 We arrived in the part of the cave where we were given a choice, to continue to the 3rd to 5th stage, or exit the cave. We really wanted to continue, however we were rushing through all of the tourist spots because we have limited time. If we continue to go through the next few stages, it will again take an hour or more. During this month, September, the next stages are muddy and according to our guide, we will no longer see our shoes because of the mud. It was also suggested to go there between December to April so you can enjoy the next few stages without the mud.

So here we are, outside the cave with our guide. 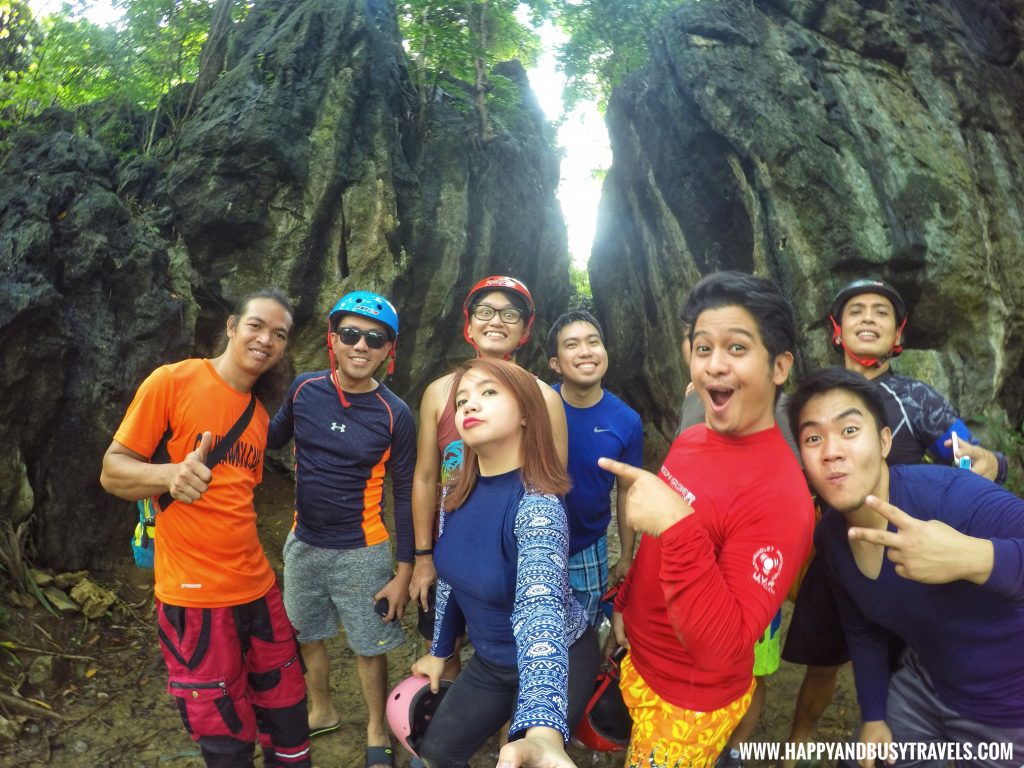 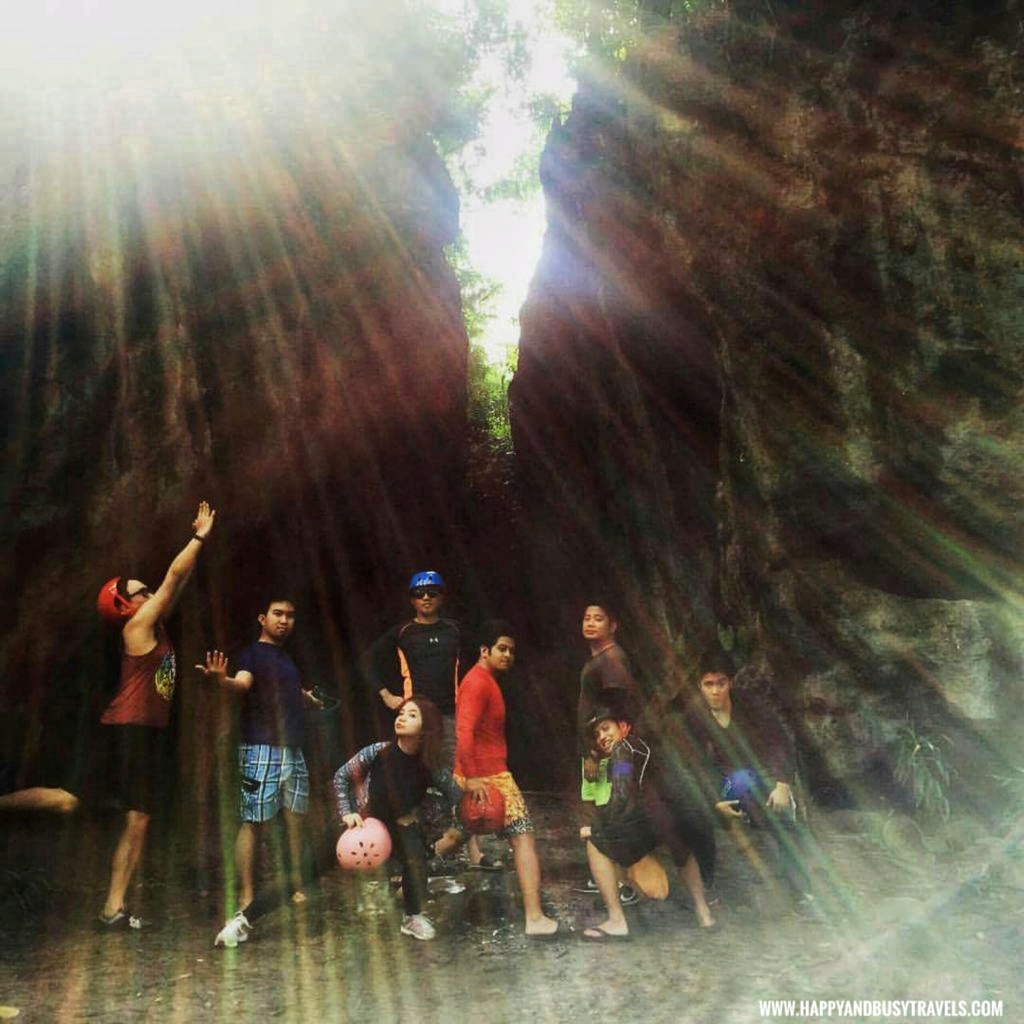