Busy said it will be just a simple celebration. I really do not mind whatever he has planned, as long as I am with him, my Valentine’s Day will be complete.

I asked Busy what clothes should I bring. He did not tell me anything! He just said that I should be ready for anything. Whoah! Shall I bring a ball gown? hahaha

Late in the afternoon… 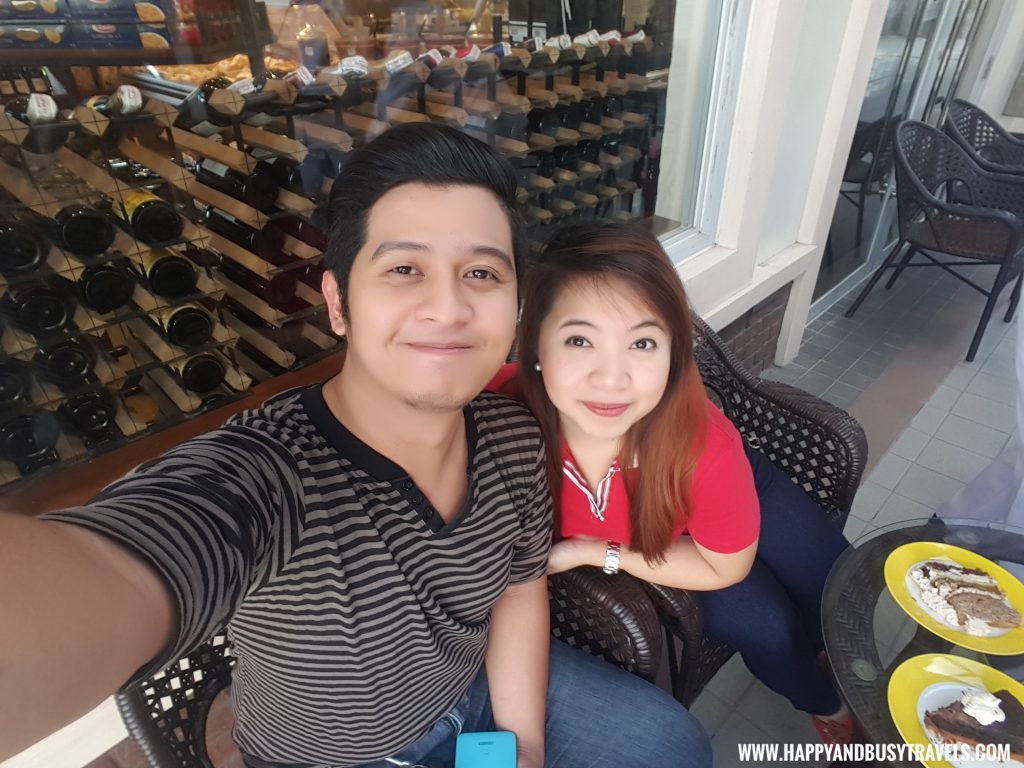 It was late in the afternoon, Busy and I went to Twin Lakes first and we had cakes from Greg’s Fruitcakery. After eating a few cakes, we went to a nearby cafe and ate there. Busy also performed in the cafe for the night.

I really love seeing him sing, aside from he is a good singer, it always make me fall in love with him.

Batangas area, not sure where

Around 10PM, we went on our way to Batangas. I am a bit concerned if there is really a celebration because it was already late at night. Anyway, it was just February 13, not yet the actual Valentine’s Day. The celebration might be on the next day.

We arrived in a small town in Batangas, but I am not sure where we were. It was late at night already so all of the residents were already asleep. We parked our car, and suddenly, out of nowhere, a man came towards us and told us to go with him. Busy grabbed our bags and we followed the man.

We were brought to the beach! Oh there was a beach near the town!

I thought we were going to celebrate there… on the beach… just beside the town.

But no! The man pointed to an outrigger boat that can only fit 3 people.

Busy told me to ride the boat.

Oh my gosh! The boat was so small, it was already 11 in the evening, and it was really really dark!

Are we going to the open sea with this boat and in this darkness???

Journey through the darkness

Well… I excitedly went on the boat. The realizations I told earlier about this boat and the darkness just came to me after the celebration. I think I did not thought of the danger because I was excited during the moment, and I know we both know how to swim.

Busy said that I should be in front of the boat, and he will just be there on my back.

It was really dark and quiet, I can’t see any island aside from the beach that we came from.

Busy told me just to look in front, after a few minutes, there were lights… it started as one, two, and it continued as a line.

When we arrived on the shore, everything were all clear. The lights were from the candles that were lit as we approached the island, and it formed an aisle. 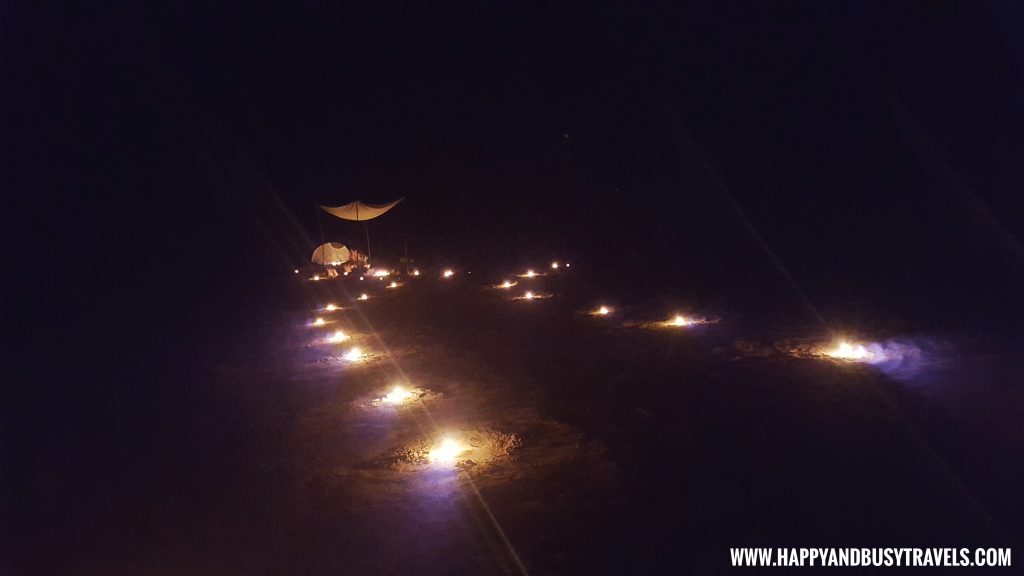 I do not know what to say!

Busy and I went down the boat and we walked on the aisle. 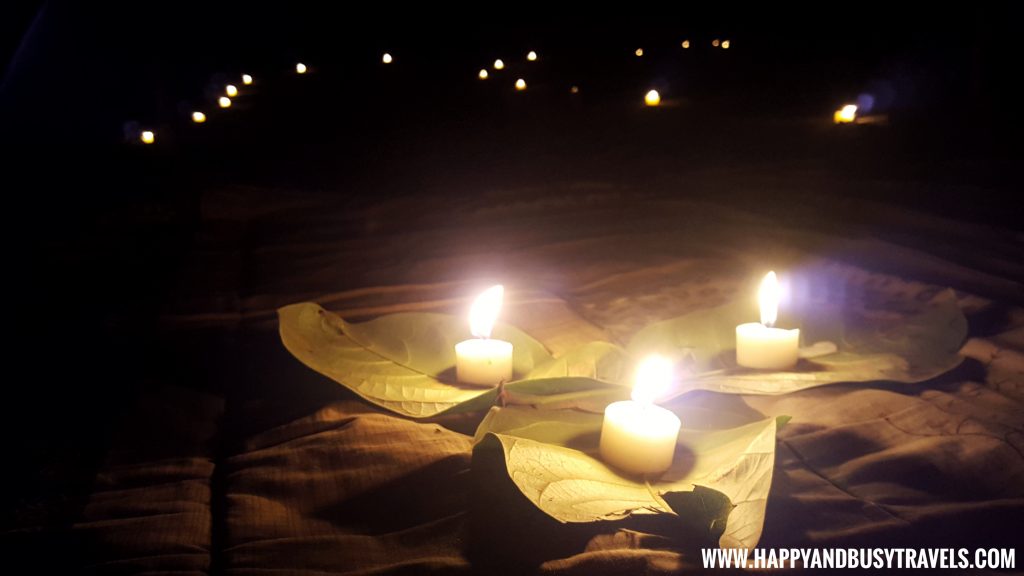 We reached the area with a romantic picnic arrangement around 12 midnight.

This is what Busy had planned for our first Valentine’s day celebration! ? 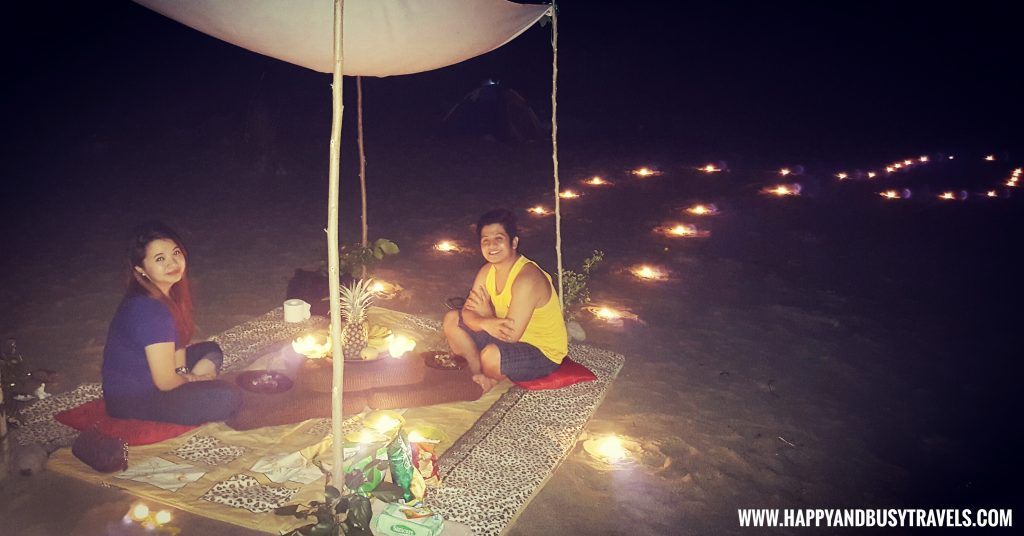 It was really romantic! I felt glad! and loved!

Of course I had teary eyes haha tears of joy! I really do not want to cry but it was too romantic not to cry.

We ate grilled pork, snacks, and some fruits. It was so cute, there was a fruit arrangement on the picnic area. 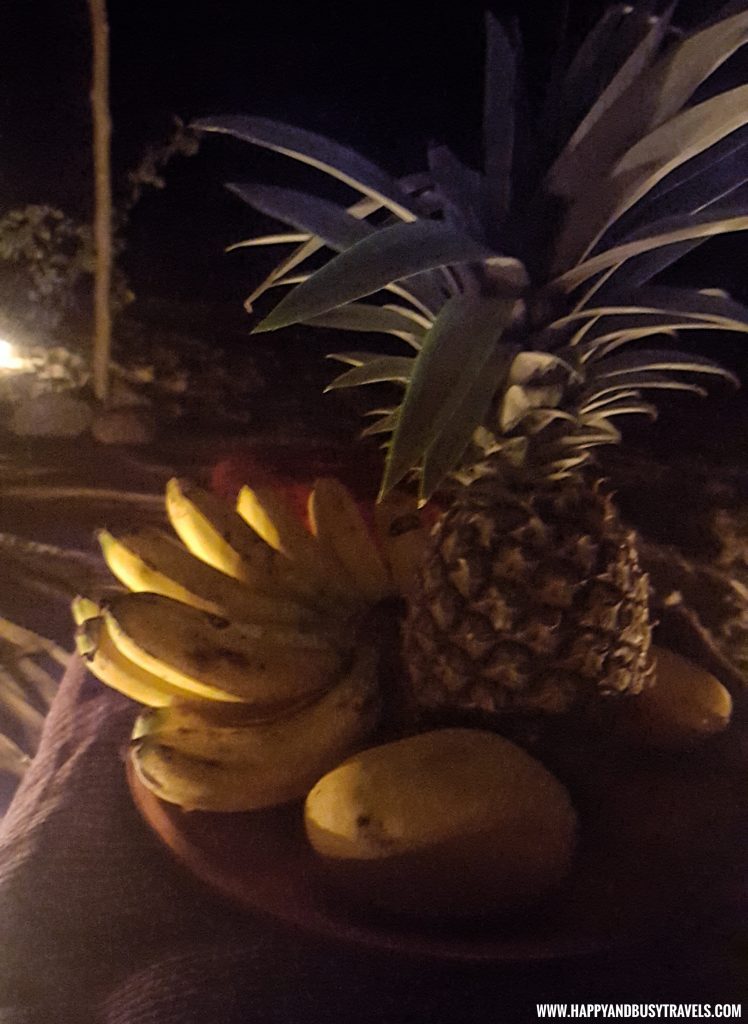 After eating, we talked about a lot of stuffs while watching the stars, chilling by the beach, and hearing the sound of the ocean.

I do not want the night to end!

But of course we had to sleep…

There were also tents with candle lights! 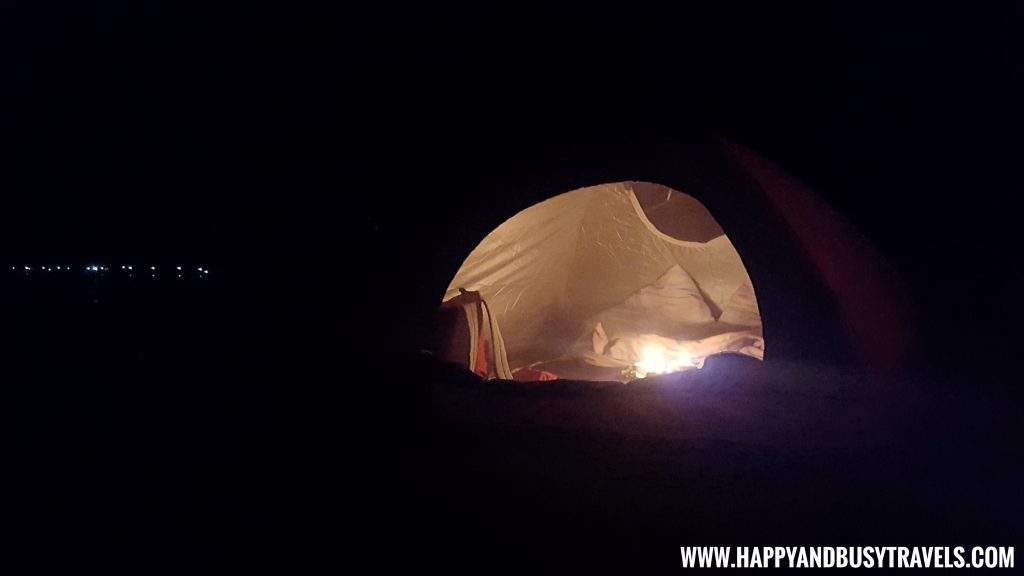 That is my bag, and no! I did not bring any ball gown hahaha.

I think we slept around 4 or 5 in the morning already.

Well, we did not really slept through the night. We were a bit scared because we were just beside the ocean, and there were a lot of chirping birds and sounds from different animals. We might be drowned or be washed away by the ocean hahaha and we do not know what were the animals in the island, there might be a bear! hahaha 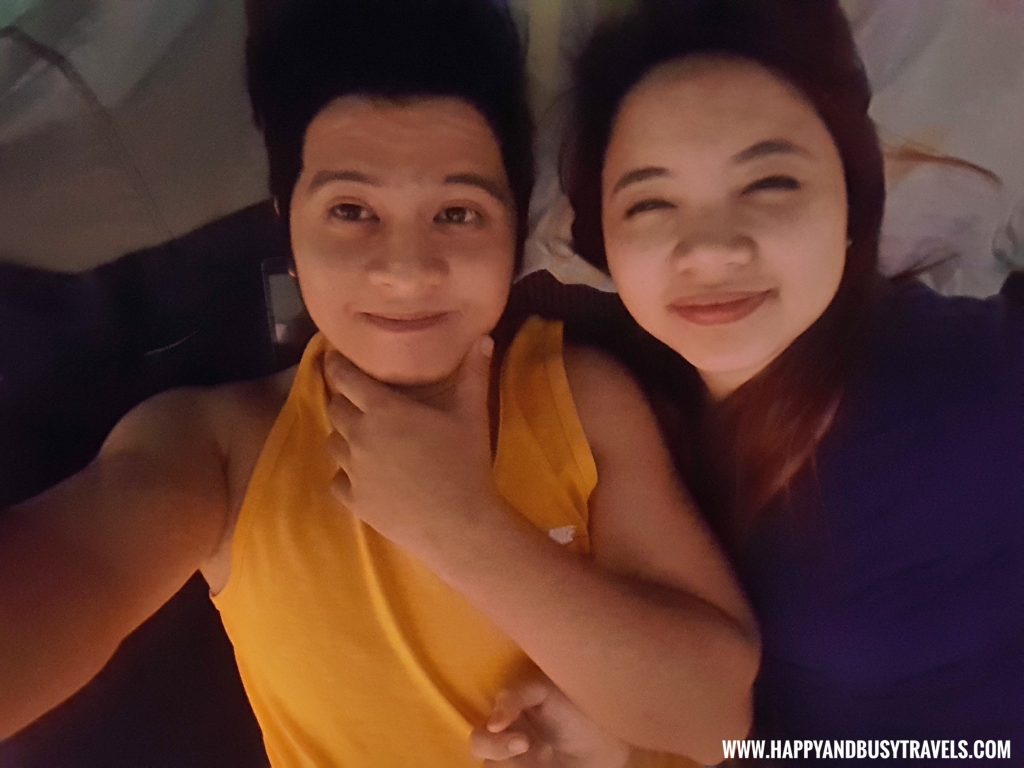 We were awake early and watched the surroundings as it becomes brighter. 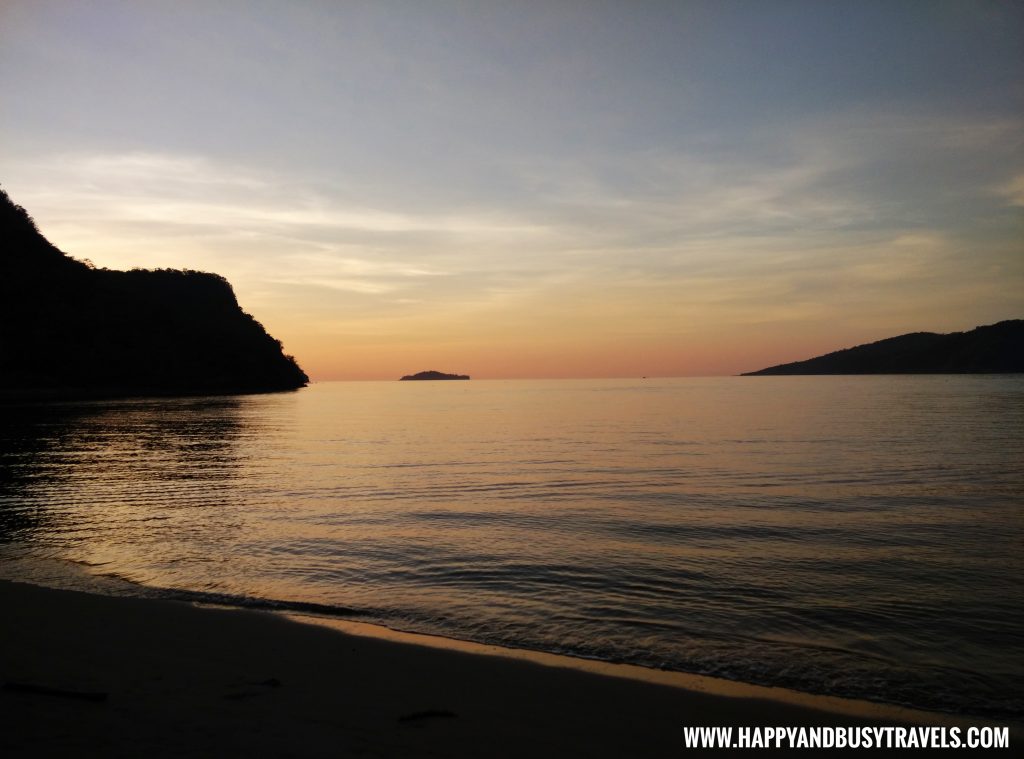 Well the remote island is not that remote at all. In the morning I saw all of the islands that were near us. There is just no one on our island but us 🙂 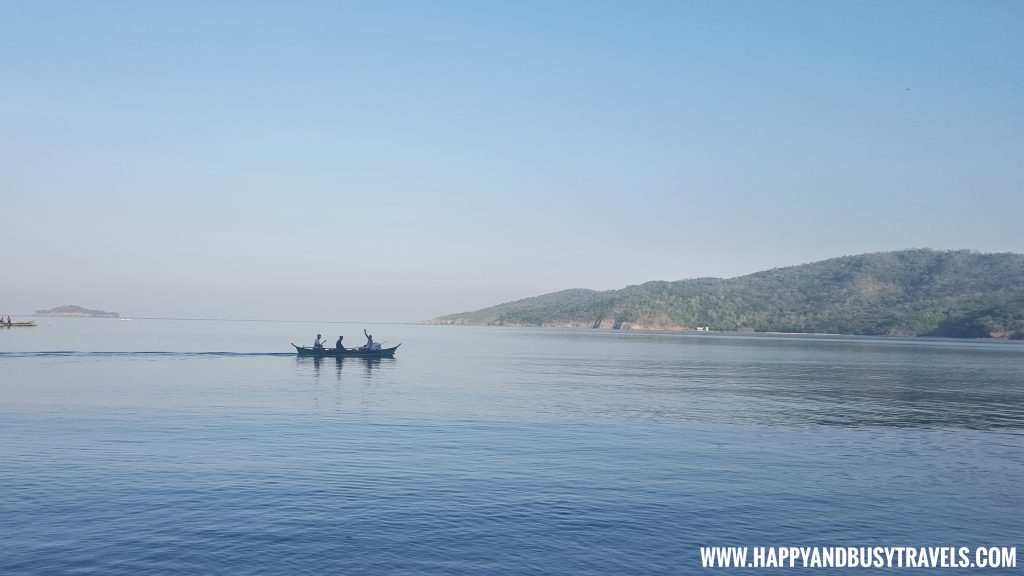 We enjoyed the beach the rest of the morning, and we were fetched by the boatman. 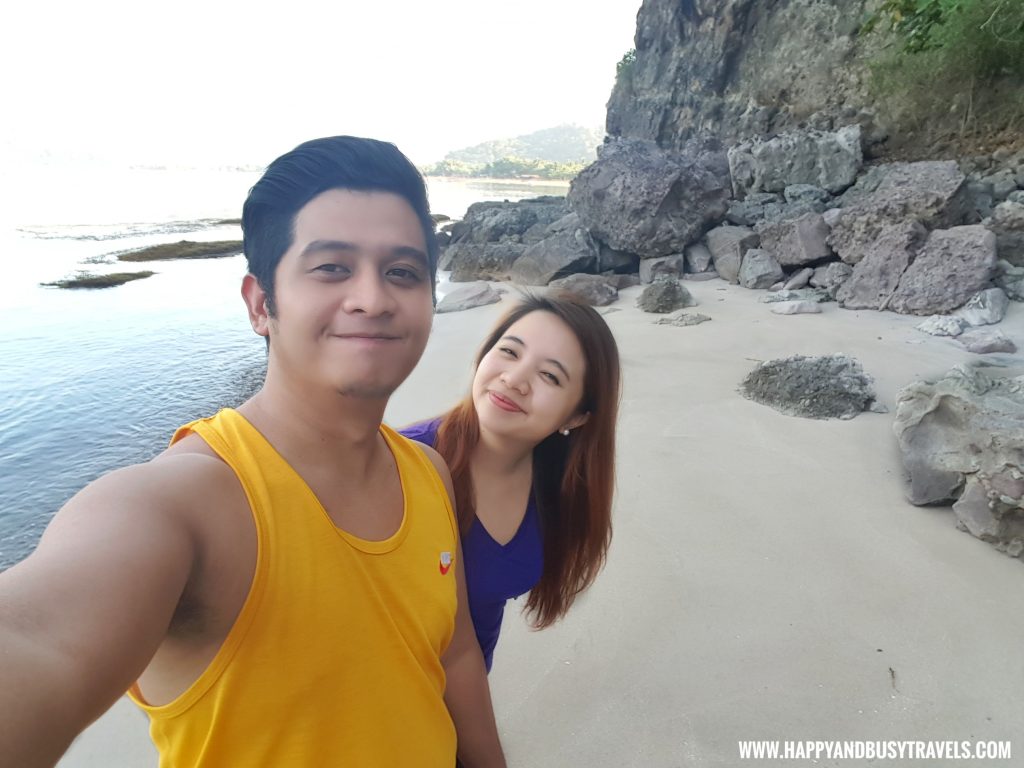 After the island, we had a road trip in Batangas on our way home.

I will never forget what Busy has done for me for our first Valentine’s day celebration. He made me feel special, and from that moment I knew that his intentions for me was real and serious.

I love you Busy!

*By the way, I would like to thank his friends who helped him arrange our special night.